Esprimi and LobesLab predict the results of the 2022 general election 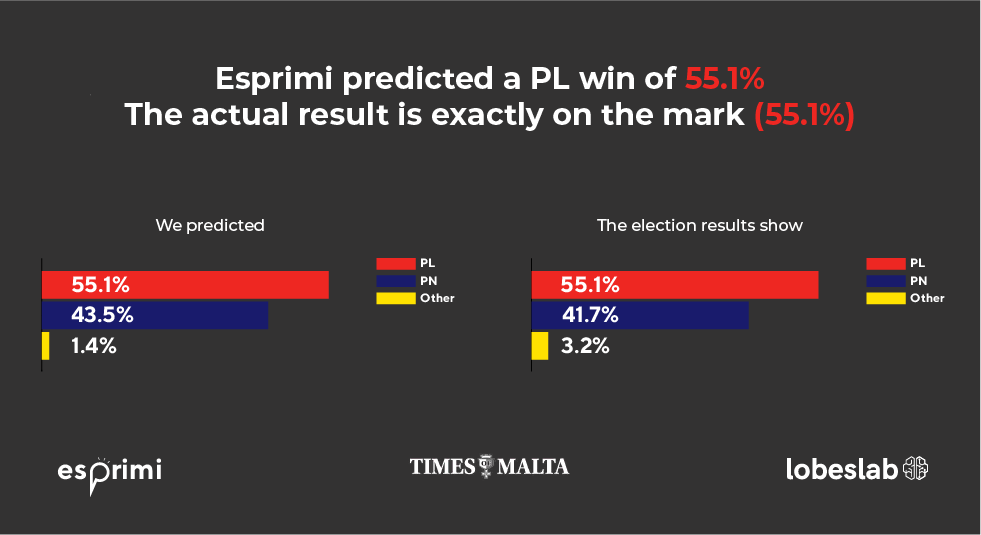 Esprimi has forecast the general election results with near-perfect precision once again. Our most recent opinion surveys, commissioned by the Times of Malta and published this March predicted a gap between the two main parties of 37,000 votes, with Labour leading the race to victory. The 2022 general election results reveal a disparity of 39,474 votes.

The Times of Malta commissioned Esprimi to conduct five opinion polls over the course of eight months. The five waves, which took place between July 2021 and March 2022, measured candidate trustworthiness and intention, among other things. Esprimi carefully crafted the survey questions that were used to collect the data to avoid bias. The sample was representative to ensure that diverse demographics were chosen to accurately reflect the views of the Maltese people.

The opinion poll information collated by Esprimi was analysed by Malta-based data science company Lobeslab, Esprimi’s sister company to analyse and clean the data for all five waves of the research. An advanced data processing technique, supervised learning (a type of machine learning algorithm), was used by Lobeslab to predict voting intentions with near statistical certainty. This was further fine-tuned by an additional statistical technique called Shift Analysis.

The recent phenomenon of declining voter turnout that has been observed all around the globe did not escape Lobeslab as this situation was factored into their calculations to provide as accurate a result as possible. Using artificial intelligence, the algorithm provided an indication as to whom respondents intended to vote for when participants failed to provide a clear answer. This is not the first time that Esprimi has predicted the result of an election with near statistical certainty. In 2017, Esprimi correctly predicted the election results of 2017 with a disparity of less than 1.8% between the forecasted outcome and the actual results.