Surprised by the election results? Not us… 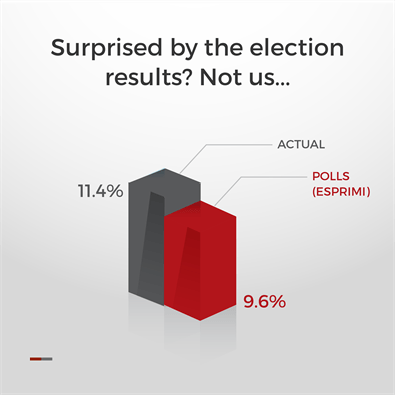 Esprimi has published the following post showing some of the key points arising from these findings with a comparison against the actual results. http://www.esprimi.eu/1717-2/

Our Esprimi team has been very busy over the past few weeks working on opinion polls, measuring the sentiment of the Maltese population with regard to their voting intentions on 3rd June 2017. One of the media houses in Malta, specifically, The Malta Independent (TMI) commissioned our research team to power their iSurvey. These were published consistently for three Sundays starting on the 7th of May until the 18th of May. A fourth wave was carried out but not published by TMI.

When we founded Esprimi within Business Leaders, its primary objective was to serve leaders and decision makers with scientific validated survey results to support their decision making. From time to time we are also asked to run opinion polls, as was the case of the referendum for Spring hunting.

Although the results were never published it was obvious that we had immediately mastered opinion polls; we had predicted the actual result. The opinion polls leading to Malta’s general election did come with their fair share of stress, especially since the polls for Brexit and the US presidential elections proved to be completely wrong.

Our team at Esprimi never shies away from a challenge, and thus we accepted to proceed with the opinion polls. Although Esprimi was only setup less than three years ago, the core members of the team, each have more than a decade of market research experience. I am excited that the team has once again proven to be correct in their polls.